History of the family

The large entrance, covered by a barrel vault, opens onto the main courtyard, where the emblematic use of light and space by architect Luciano Laurana is obvious.
The sleek columns, arches, arcade and trabeations are all the works of Laurana. Following his departure from Urbino in 1472, the courtyard was completed under the supervision of Francesco di Giorgio Martini, who created the first-floor windows overlooking the courtyard.
In spite of the two different architects, the courtyard continues to be an example of unity and consistent style. The inscription above the arches distinguishes the whole space, celebrating Federico da Montefeltro as a great condottiere in war and merciful lord in times of peace.
The ground floor is also home to many other rooms, used for the organisation of life at court. On the west side is the ramp down to the service rooms in the basement. To the right are the other areas that form the “Banquet” area: this was originally the apartment of Ottaviano Ubaldini, Federico’s trusted advisor and, from the early 17th century, they were occupied by the Duchess, Vittoria Farnese.
The “Banquet” area leads onto the Hanging Gardens and the greenhouse, while other rooms take you to two small, twin chapels, the Chapel of Forgiveness and the Temple of the Muses, linked by the spiral staircase in one of the turrets to the study on the noble floor.
To the left of the Palace entrance are the rooms once occupied by the Duke’s library, designed to be genuine reception rooms and once home to a collection of books that was famed throughout Europe. On Federico’s death (1482), the library numbered more than 900 humanist codices, including 600 in Latin, a few in the vernacular, 168 in Greek, 86 in Hebrew, and 2 Arabic. It included the corpus of Greek and Roman works then known, a few mediaeval texts and a wealth of contemporary works, with a preference for scientific codices.
After Federico, all of his successors added to the family library and on the death of the last duke, Francesco Maria II Della Rovere (1631), it contained 1760 volumes.
In 1657, Pope Alexander VII Chigi acquired the whole library, which is now known as the “Fondo Urbinate” in the Vatican Library. 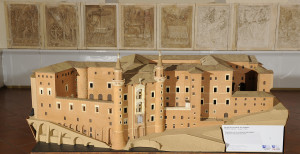